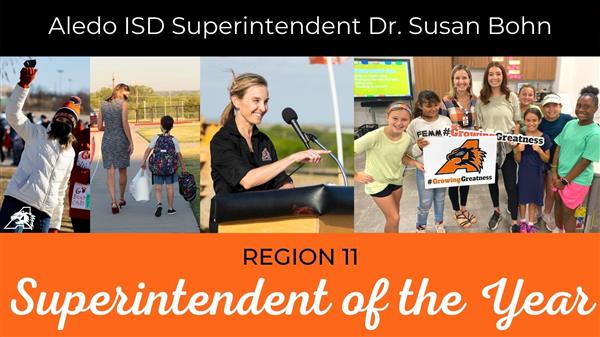 "During such a transformative time for the Aledo ISD, we are incredibly lucky and proud to have Dr. Bohn leading our district,” Aledo ISD Board President Hoyt Harris said. “From managing our rapid growth to her steadfast leadership of our community through the COVID-19 pandemic, she has a student-centered focus that is reflected in our entire staff who work so hard to ensure our Bearcats have exceptional experiences daily.

"On behalf of the entire Board of Trustees and Bearcat community, we would like to congratulate Dr. Bohn on being chosen as the Region 11 Superintendent of the Year," Harris continued, "and thank her for her tireless efforts to continue growing greatness in the Aledo ISD.”

Candidates for the award must be nominated by their school boards and must demonstrate strong leadership skills, dedication to improving the quality of education in their districts, commitment to public support and involvement in education, and ability to build good employee relations among teachers and staff members.  The award application highlights the following performance areas:

In addition to addressing the specified performance areas in the application, school boards were asked to answer the question, “Why should your chief administrator be selected as Superintendent of the Year?”

Dr. Bohn, a former classroom teacher in Fort Bend ISD, became an attorney and worked in school law for the Bracewell & Giuliani law firm in Austin.  She then served the Lake Travis ISD as general counsel, assistant superintendent, deputy superintendent, and interim superintendent.  She went on to serve Lockhart ISD as superintendent of schools for three years before taking the helm at Aledo ISD in 2018.  She earned her bachelor’s and master’s degrees from The University of Texas at Austin.  She also received her juris doctorate from the UT School of Law.  In 2017, she received her doctorate in education from Texas Tech University.

Upon joining the Aledo ISD staff, Dr. Bohn hit the ground running as she focused on putting learning and teaching first, overhauling the district’s image, understanding and improving Board-administration relations, and setting goals – all while managing and understanding the AISD’s status as one of the fastest-growing districts in the state. Very quickly, the district’s vision of Growing greatness through exceptional experiences that empower learnings for life was formed along with the district’s first-ever Instructional Focus, setting the tone for the path forward for the entire district.

As part of TASB’s award process, regional winners for the SOTY award must be selected by a panel of local school board members.  This year’s panel included trustees from districts throughout the north central Texas (Region 11) area.

Steve Newcom, a judge from the Eagle Mountain-Saginaw ISD, praised Bohn for continually keeping students as her main focus.  “Keeping Students Learning is the first topic of every board meeting, which demonstrates how every decision is based on the impact it has on students in the district," he shared.

“Dr. Bohn truly exemplified the five core values she shared with us – excellence, grace, integrity, honor, respect – and it is evident that she uses those values from the Boardroom to the classroom,” shared Rochelle Ross, a judge from Hurst-Euless-Bedford ISD.

Jerry Campbell, a judge from the Bluff Dale ISD, shared that, “Dr. Bohn’s values and high expectations for her administration, staff, and students is apparent, and she will represent Region 11 so well as our Superintendent of the Year.”

As the Region 11 winner, Bohn will move on to the state level of the competition.  The state selection committee will interview all regional winners on August 27-28 and choose five finalists.  The finalists will then be called to participate in a second interview by the state selection committee in September, and the state winner will be announced at the Texas Association of School Administrators/Texas Association of School Boards (TASA/TASB) joint annual convention scheduled for September 24-26, 2021.

The state winner of the Superintendent of the Year award receives a $5,000 professional development award and a ring, which will be presented at the 2021 TASA/TASB Joint Annual Convention. All other finalists will receive a $1,000 award.  The award program is funded by Balfour and coordinated by TASB.