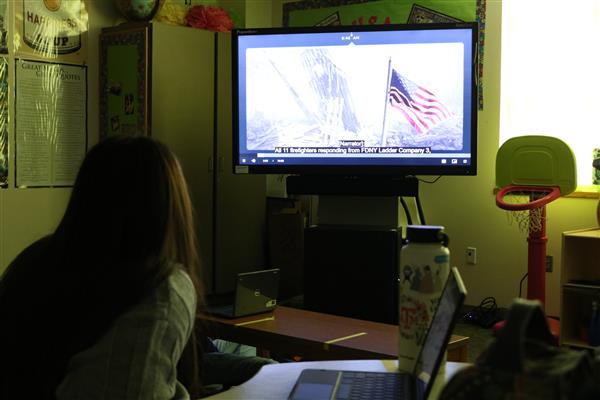 It is not lost on Aledo Middle School history teacher Keegan Roady that most of her eighth-grade students were born five years after the attacks on 9/11.

To some of them, she said, it may be just another event they learn about in a history book.

So this year, on the 19th anniversary of 9/11, Roady tried something different with her Digging Up the Past history class as Roady’s eighth graders participated in a 9/11 “Anniversary In the Schools” webinar that was presented through the National 9/11 Memorial and Museum.

“I was hoping it would bring a more emotional response for 9/11,” Roady said. “I wanted to get them more emotionally involved and for them to see the overall impact it had.”

The session allowed students to pause and reflect on what they had learned, and the webinar also had a chat feature where students could ask questions and chat with education staff members at the museum.

Students discussed how they didn’t realize there were schools nearby, how airport security has changed since 9/11, and how they would have reacted given similar scenarios that were presented.

Roady considered the lesson a success, and her students definitely walked away with a lesson they’ll never forget.